Today temperatures in Kuwait are up to 54 degrees Celsius. This is unbearably hot. The country is dry and sandy, wich was once different, long ago, when the oil deposits where formed. Then it was a tropical place with swamps where plants sank into capturing Carbon from the atmosphere and storing it. Enormous amounts of it for millions of years. 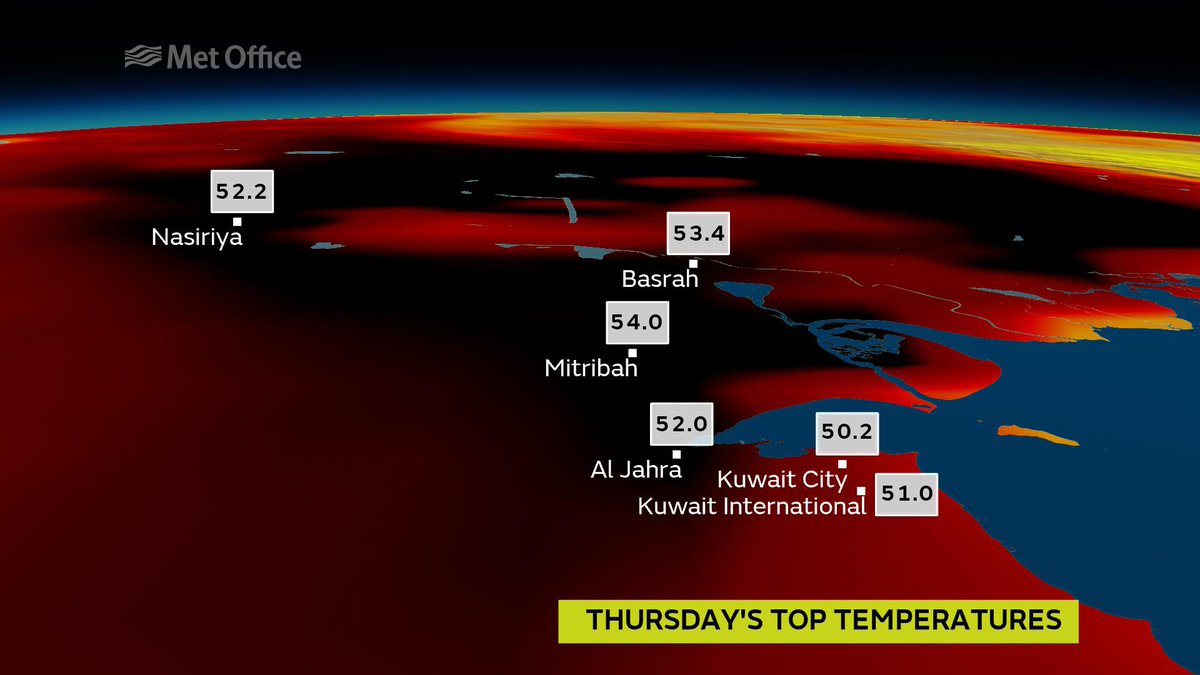 In those days it was hot as well, up to 12 degrees hotter. This means that even though Kuwait is a desert, and neighbouring Saudi Arabia is as well, it doesn’t have to be. It’s a matter of adding water. Of course the crust of the Earth has moved around and opened and closed water bodies and changed winds, but if we lool at the Saudi peninsula we can cleary see how the winds blow, over it, and we can see where we would have to inject water to cause more rains, more plants to grow, trees, to cool the air and remove CO2. The potential is there.

Maybe we should focus on regions where it is easy to plant and grow trees first. India is planting trees en masse, it is one of those things nature doesn’t do too efficiently by itself, just like shaping the landscape to catch water. A tree seed is a lottery ticket for the species, it might become viable and grow into a new member. Every apple has 8 or so seeds that can grow in a new apple tree, look at the exponential factor that would be in place 1 tree, maybe 20 apples per year, 8 seeds, that’s 160 new trees every year, after year 5 you get 160 x 160 new trees every year, after another 5 160 x 160 x 160 = 4.096.000 trees, and 5 years later 655.360.000.

Desalination as we reported on it is making quick strides in becoming less complicated or expensive, less energy intensive. Ionic desalination can be delived in a long lasting installation that uses only a fraction of now common RO desalination plants, and it can run on solar heat or electricity. In humid climates water is in the air, the only trick is to get it out. This can be done by solar electric cooling mechanisms, some of which are also highly durable (say a panel and a peltier element, or some kind of ammonia filled heat pump).

Death valley, until today the place with the hottest temps on record..no longer! Here during a flash flood, that does not permeate the ground (see this post)

In the desert the material for larg scale structures like channels or aquaducts is readily available : sand. No need for cement when you have TerraWatts of solar energy pounding down from the sky. Lots of power to run electric devices that do whatever is necessary. Even brine water as found in the Dead Sea is a rich source of energy, and energy can be used to irrigate, desalinate, plant and manage new life. The formula for loss of life today is largely “We added human technology” but this same method can reverse the trends. Technology combined with renewables can make the planet green again, robots that plant, dig, manage crops. Its done in the fossil fertized intensive farming industry, but why not use the tools to do the same without the intention to harvest?

The use of the 80’s invention called the Saltwater Greenhouse, if kept out of the impractical hands of big investors and into that of smart entrepeneurs, can mean more food, more crops, more green stuff growing while also delivering more fresh water for plants growing outside. The art will be to use the available resources, try to create cascading (positive effects).

The art of water allocation, counted by the minute..

“Using the normal measure of temperature, the study shows 45C would become the usual summer maximum in Gulf cities, with 60C being seen in places like Kuwait City in some years.” (by 2070)

With the application of available technologies, including that of making solar grade silicon for panels using solar heat, the Middle East can turn itself green, removing considerable amounts of CO2 from the atmosphere in the process.