Fresh water technologies threaten a budding billion dollar market. The CEO of Nestle openly states that water is no human right, and as heatwaves and droughts increase the demand side for water producers is secured.

There are a couple of low cost, renewable powered ways to make fresh water, and those are kept pretty marginal due to overinvestment, patent hoarding, misrepresentation. Simple techniques like freeze/vacuum desalination, which is cheaper even in hot environments than solar destillation, and very low tech is never mentioned. The Dutch rainmaker that condenses water out of the air using wind energy is now locked in to become a high investment technology (rendering it 100% under control of carbon invested banks). The solar electrochemical method of desalination developed by Saltworkstech seems to be pushed to the background and is falsely compared to RO desalination. It’s like there are secret chaperones of the leading technology that pick off anyone sneaking up from behind..


Hiding a clean fuel, reinvention not appreciated..It’s hydrogen on a N2 carrier..

Reinvention is an important part of the technology lockdown most people are unaware of. Algae for biodiesel has been reinvented so many times it’s hard to keep track. The aquatic species program layed out what needed to be done to make the necessary quads of biofuel to power the US. Since the research and novelty has been repeated many times. Usually fossil fuel energy companies or banks show interest to then politely strangle the initiative. Solar panels (stalled for decades), Salt based heat storage, solar oxygen generation, cobalt based solar hydrogen, ammonia car fuel, inflatable CSP devices. The list is endless. The world could be a different place if the carbon cartel had not been so vigilant and people not so easily fooled. It took real effort to put us on our path to extinction, real intent (google Naomi Oreskes if there’s any doubt in you mind).

The seawater greenhouse is a product of the imagination of Charlie Paton of a company called ‘Lightworks’. It uses the wind to evaporate water from ocean water, then condenses it against the same cool water. The principle of using condensation to catch water from the air is a recurring approach, perhaps because one only needs to absorb a little bit of energy to condense it. The Dutch rainmaker windmill (the early sellable version) makes 6000 liters per day! The version shown in the video uses wind electricity to power the pumps, but a lower tech (and cost) vesion would simply use the wind directly. No wind would mean no evaporation anyway.

But today Tenerife is not full of them. In fact, zap to 2012, 18 years later and the technology returns, in the hands of Goldman Sachs. As will be explained below, Charlie Paton was involved but bought out because GS changed the design basically taking it apart to the point it was not Charlie’s invention anymore. 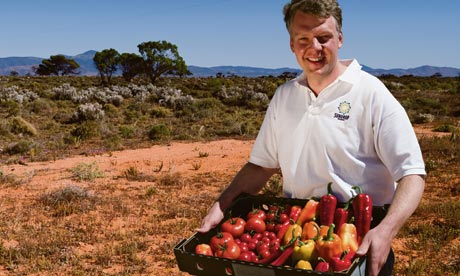 Using the usual excuse of "the market" to set quality standards for food GS (Sundrop) motivated introduction of gas powered generators, a solar desalination plant and other ‘improvements’ driving up cost but also ‘economic value’ and more importantly, pushing Charlie out.

"Although [Charlie] and his family built the South Australia greenhouse with their own hands, Sundrop has abandoned pretty much every scrap of the ultra-simple Paton technology regarding it as "too Heath Robinson" and commercially hopeless."

Ultra simple technology can not be owned. It’s as ultra simple as that. You need a epithelial extention alignment device, not a comb. Combs are cheap, there’s no magic, where’s the cashflow to keep the banks healthy? So there need to be more parts to any design to drive up cost. As a result we won’t see Charlies invention work, and won’t guess it’s actually the better option.

"[Charlie] is particularly distressed by the installation of a backup gas boiler to keep the crops safe if it’s cloudy for a few days." (source) We rest our case.

How easily people allow a company like Sundrop to create a fossil fuel dependend clusterfuck out of a perfect invention, while Charlie is still promoting the original design and not getting much traction. This is the power of hiding alternatives. Banks don’t have to invest in similar ideas while Goldman is on the case, and so this technology will not develop (because the seawater greenhouse is not desalinating seawater), and nobody will try to do the real thing. Mission accomplished. The non-seawatergreenhouse is part of a demo site in Quatar. You can see it’s gotten a little out of hand and futuristic, it doesn’t matter. Explosive growth of a simple approach won’t happen. There are more roads to Rome though as below video shows, so there’s hope we can enjoy fresh desert crops yet.