Eesha Khare just won $50.000 for developing a nanorod ultracapacitor able to store several times the amount of energy of common ultracaps. This is a big thing, she should actually het millions for the breakthrough because it has serious commercial value. It means you can quickly store much more energy than possible today for cars, wind turbines, phones and all kind of other stuff, using relatively cheap materials. "Capacitance of 238.5 F/g compared to the next best alternative supercapacitor in previous research of 80 F/g"

To understand what this all means we need to understand capacitors and ultracapacitors a bit. Common capacitores store energy by creating a barrier for electrons. In a wire electrons will flow but if you put a barrier or a cut in the wire the electrons will accumulate on one side. The electrons stay in place for two reasons, one is that you are putting a charge on the cut wire, the other is that the negative electrons on one side ‘see’ the positive holes on the other side of the cut (so called electric field effect), and are attracted by them. If you increase the surface of the ends of the wire you see more electrons accumulating, if you put the ends of the wire closer together you also see more electrons accumulating. So engineers made little devices that where cut wires with big end plates and called them capacitors, mainly because this accumulation of electrons turned out to be usefull in electronic devices.

More about how they work here..

The development of capacitors has been to make the thickness of the barriere less, the surface area of it bigger, and recently adding a thin layer of electrolyte in which electrically charged molecules can move, storing energy in the tension that is created by electrostatic attraction of the two sides. It holds the middle between being a battery (which has a chemical reaction) and a normal capacitor (without electrolyte). The last form turned out to be a big improvement, justifying the name ultracapacitors for the new class it enabled.

An ultracapacitor has both plates and electrolyte, but no chemical reaction like in batteries

Ultracapacitors are used in electric vehicles to store the energy from batteries, brakes or hydrogen fuel cells quickly, as a buffer to protect those devices from the stress of dealing with the dynamic demands of driving. They charge and discharge super quickly and can hold a lot of energy. For a while we have expected improvements in ultracapacitors because they did not have the maximum surface area, which if increased increases the amount of charge that can be stored. The room for improvement was understood to be in using active carbon electrodes. Active carbon has an increadible surface area up to 500 m2 per gram! Of course the carbon has to conduct the electrons so it has to be one structure all the way from the electrode to the place the charge ends up. These type of ultracaps are actually made by Power2G.

Other means to boost the surface area or structure the way electrons can interact are also promising, like creating a nanorod structure as Eesha Khare did. Nanorods are little pillars that come about by a chemical or etching process. They stand on the electrodes and reach into the electrolyte and the results are fantastic. Almost three times the charge can be stored in nanorod ultracaps than the best type to date. This means we can quickly store and use a lot of energy with a small device. 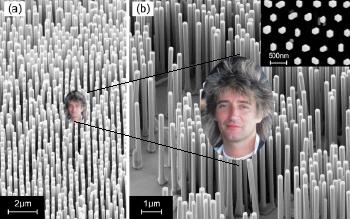 This resulted in excellent energy density 238.5 F/g, 20.1 Wh/kg, comparable to batteries, while maintaining a high power density of 20540 W/kg.

It seems progress if seven beter already with other scientists topping Eesha Khare with even more storage capacity, actually using her type of nanorods as a scaffold for MnO, Magnesium Oxide, nanorods. This resulted in a capacity of 912 F/Gram, almost 4 times more, possibly resulting in 80 Wh/kg energy density and 80 kW/kg power density. So this would put the new MnO capacitor in the same class as NiMH batteries and way beyond lead acid, while being much faster charging and prehaps cheaper to make.

Ultracapacitors are not batteries, they don’t wear from being charged or discharged. As a result they last a really long time, and if they break down they are usually fully recyclable. They don’t have to contain much toxic chemicals and have no moving parts or fumes. They need some management electronics but are pretty robust otherwise. So for home storage ultracaps look like a good option, also because it doesn’t matter if they take some space (put them on the roof, in the ground or basement).