Recently a new Amonix CPV (concentrated photovoltaics) plant came online in Colorado. CPV cuts cost over normal PV by using optics and special photovoltaic cells to get more power out of less raw materials. Silicon wafers are becoming cheaper through innovation every year, but they still cost more than a plastic lens that can concentrated the light from a bigger area on a smalled cell. CPV only makes sense if you also track the sun, this in itself can lead to up to 38% more output.

CPV has existed for decennia now, especially because the cell price was so high before. Lots of DOE funds have gone up in smoke developing systems that where not deployed. The list is quite long, and the investor capture stories easy to find, we reported on some here. The truth of CPV is that it is a lot cheaper than full silicon pv. That usually means it is kept off the market until it becomes as expensive as all the other products, so that entering the market ultimately fails.

To break the market protective forces (usually the banks) subsidies are necessary. The free market is not free at all, it is divided, and the powerbase to control it is fossil feul credit. In that sense renewables are a real disruptive force, because if you have a 5 MW CPV plant, you can freely manufacture a lot without needing any credit to buy fossil fuels. Parabolic mirror based CPV by Cyrium, with $15 mln funding

There is several ways to do CPV. It boils down to how do you concentrate the light. Direct sunlight can be focussed by lenses and mirrors, in the case of a mirrors there are three options, in the case of lenses there are two. Mirrors can be parabolic, which causes them to concentrate all the light in one focal point or area, where the PV cell is placed. Very high concentrations can be reached, up to 10.000 sun, so the limiting factor is the thermal integrity of the cell. 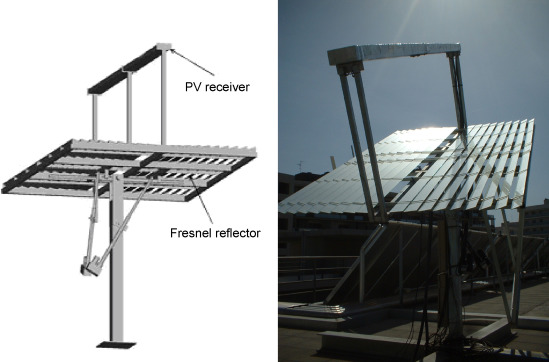 Fresnel mirror systems for CPV are rare, they are usually used for concentrated solar thermal applications, but also in combined systems using a parabolic trough mirror. The mirrors produce a line focus on which one can place PV cells. The nice thing is that one can keep te cells cool by running water behind them, which both produces steam or hot water and inproves the performance of the cells.

A light guide CPV works by using lenses or mirrors to change the direction of light. Like with glass fibre, under certain circumstances light can be moved around even around corners with little loss. The most common way to do it is by funnel shaped mirrors.

An experimental CPV device with a ball lens, but beneath it you can see light funnels

When a lens is used the direction of light is changed by making it pass through material that slows it down. Because of the speed difference of light in air and glass for instance, the light changes direction at the edge of the glass. Lenses can be solid or fresnel. Solid lenses have a limited size because of the weight of the material. That is why fresnel lenses where invented, the earliest in light houses. The idea behind a fresnel lens is that as the light does not change direction as it passes through the bulk of the lens, you might as well leave that part out. So fresnel lenses are hollowed out and flattened spherical lensen. 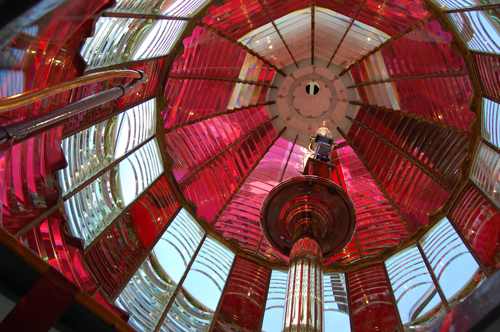 Fresnels can also be made from plastic, PET (same stuff as waterbottles) and be durable in the UV (that usually causes yellowing of plastic). Amonix uses them, and below you see another design. PET fresnel lenses are expensive as a consequence of their PV use, you pay 80,- Euro for a lens of about 33 x 33 cm. One could imagine someone collecting waterbottles to turn them into CPV fresnel lenses.

Yet another type of CPV installation

The cells used in CPV applications are usually multijunction cells. They consiste of stacked cells with different spectral sensitivity so more of the light spectrum can be converted to electricity. The cells also need to be able to widtstand high temperatures, a 1 x 1 meter fresnel lens will melt stone easily. The optimium is sought where the higher concentration of light leads to more output, while the increased resistance and lower efficiency due to higher temperatures. The cell size also determines the cost, so has to be minimal.