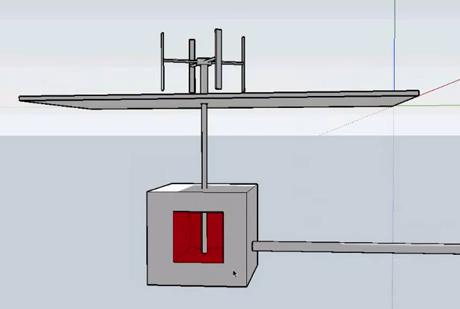 What is it? It is a (VAWT) wind driven heat storage device.

As a dutch person I may have a bit more imagination when it comes to uses of wind energy than the average global citizen. We had windturbines since 1300ths or so and used them for water pumping, cutting, sawing, grinding, pressing in an industrial way long before the rest of the world caught on. When Rotterdam drowned because of to much water being (windmill) pumped into it’s main river upstream to create new farm land (most of our country is below sealevel) the city commisioned 8 brand new wooden windmills, in a row, like a regular turbine park, to push the water to another river. Holland thus sported the first real wind farm.

The US got one dutch windmill as a gift, it’s in San Francisco’s Golden Gate Park. Others where taken apart, and shipped to be reassembled in the US (one woodcutting mill at least). Maybe because of this tradition, but also because of my frustration with ignoring heat at one of our primary renewable energy requirements, I thought of making heat with wind. It is the simplest thing to make heat, all energy tends to become heat after a while. If it wasn’t for the Sun showering Earth with high grade photons we would be stuck on a slowly cooling rock, because heat doesn’t create much options (although it can store energy in chemical compounds.). So I claimed the url Windheatingsystem.com and wrote about the idea on this blog. Created the video below.

True my video is made after Apple filed for the patent, but I didn’t know that and had been thinking about it for some time. The oldest revision on Windheatingsystem.com is from februari 2011. Now compare to the imags from the apple patent:

Apples new patent of an application of wind to heat conversion.

You can see the same paddles in a liquid storage tank as in my video. It turns out to be the simplest way to generate heat. In the Apple patent the heat in the tank is then used to generate steam to drive a turbine, through some intermediary medium, probably with the optimal evaporation point. This is standard procedure, you can run a turbine with water steam, but also with a mix of f.i. ammonia and water, or alcohol, aceton, whatever works best. The Apple patent is imho not valid, because it is an application of several known technologies including my wind to heat converter, and combinations of non novel techniques are never patentable (except in the US?). 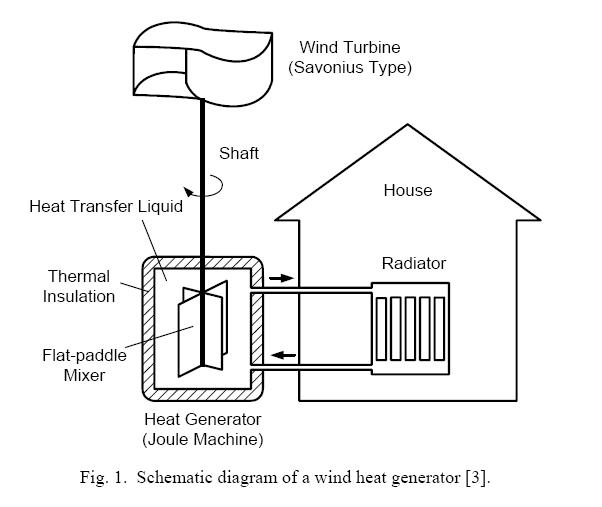 Now to be honest, as we looked around on internet this year we discovered the above invention. It’s the same thing we thought of, but instead of a straight blade VAWT it uses a savonius vertical turbine, a very inefficient one, probably to scare off interest in the concept. So in fact Apple could have stolen that idea and used it to file for their patent 5 years later. Because the above image is from a Singapore paper of 2006, quite a complete and buildable concept, called the Joule Machine. What the paper does nicely is calculate the yield of the machine given the dimensions of the blades, something I skipped because it’s barely relevant a soon as you know how much energy you put in through the axle.

The paddles are extremely low tech, yet just what you need. another way to do it is with magnets, which is not optimal because heat demagnetizes them.

Now in our dysfunctional credit driven innovation environment people will now wait for Apple to build the thing, being weary of being sued shitless if they try themselves. Bankers will make the thing sick expensive, because the main theme is GAS, not WIND. Since Steve Jobs died it’s been glaringly clear Apple finance is run by robbers, ask them what happened to thier cash reserves, their only weapon to keep them out of the clutches of debt. So we may be looking at patent capture and not see this thing build any time soon.

We can easily predict there is a role for a moleten salt MFD (Magneto Fuild Dynamic) generator here somehwere, but let’s wait for the Apple patent!

For the home this device is very usefull, derivative devices using mechanical energy as well, so as we suggested, the wind driven heat pump, can multiply the energy of a small 1 kW turbine into 4 kW heating or cooling. We lacked the budget to build demo devices, but are still looking for those that want to pool some cash and build an open source test rig. The sooner the better, because once a patent is granted you get all kinds of money sharks playing with something that is basically a game changer. That is what makes our world sad, while we should burst with joy over the fact we have a sun, we have wind, we have waves, able to provide us with immense amounts of costless clean energy.