I used to play with electronics as a teenager. I didn’t get it in terms of  circuits but I liked the materials. Me and a friend had gone through our part of Rotterdam asking people for old radio’s and one day a lady showed us a whole attic full of old vacuum tubes and nondescript bakeliet (fenol resin) devices. We could have it all.

What I remembered from these vacuum tubes was that it had a filament that glowed, giving of electrons. These electrons would then be accelerated or moved to another pole or piece of metal in the bulb and whatever happened would amplify or rectify the incoming signal. The important bit was that the electrons where released from the filament only because it was heated up. As I am working on concentrated solar power where temperatures of 2000 degrees can be easily reached, did this mean I could make current directly with heat if I had a vacuum tube? What was this effect in the filament?

It turns out to be called the Thermionic or Edison effect. This name ‘Thermionic’ predates knowledge of electrons. What people discovered in the 1800’s was that a hot piece of metal gives off stuff, and that whether it does depends on it’s polarity. Only negatively charged hot metal gives off thermions. Ions are also released, and you see that in radio bulbs as the top gets metalized over time..

But metals can give off photons and electrons for many reasons. Usually because they are hit by fotons that move electrons out of their ‘band’ or area around the atom where they can exist. In metals there are free electrons that live in an ‘ocean of electrons’, the shine of metals is actually the reflection of the surface of that ocean (ok, a circular explanation because what is the reflectence of an ocean other than the result photons bouncing offthe charged ions in it?).

But as electrons are very loosely bound then can be forced out due tot the violent movement of the atoms, and like an astronaut floating away from the spaceshuttle, once they reach a certain distance, they are free…

The effect of escaping electrons is amazingly called the Edison Effect, because it is one of the things Edison studied and discovered! Besides the Edison battery, electric cars and the light bulb, or actually in the process of making the light bulb. You have to expect brilliance of a person that invents a light bulb..

So far so good. I started to piece together a solar concentrator and a vacuum tube bulb, hoping that the heat would be able to produce a significant current by forcing electrons out of a filament or plate. As long as the electrons would not fall back this would convert heat into electicit. So the question was how much power to expect?

Reading the Thermionic Emission Wikipedia page all the way down feeling very original in my thinking I had one of these moments of ‘of course, reinvented!’, meaning that there are scores of very usefull inventions that are kept in stasis of reinvention to keep them from the carbonfuel based economy.

"Photon-enhanced thermionic emission (PETE), a process developed by engineers at Stanford University, that harnesses both the light and heat of the sun to generate electricity and increases the efficiency of solar power production by more than twice the current levels. The device developed for the process reaches peak efficiency after it reaches 200°C"

Claimed to allow 50% efficiency, and why don’t we all know about it? This is revolutionairy. This is the breakthrough for CSP. Skip through the video below about PETE, here is a link to a long version that I must say does contain some wierd aspects..

So now my search was at it’s end. The filament in the vacuum tube could be used to generate power when heated from an outside source. This photothermionic effect is not the photovoltaic effect, it has nothing in common with it. It requires a conducting material, not a semiconductor (this is what is wierd about the above video). The electrons must be very hot and close to a surface they can escape from. That is why one would like to put nanowires on the surface that are like tubes with the electrons bouncing in them like lottery balls..Anything that conducts and stays dark when it gets very hot is usefull..

The devices that use this technology will be a combination, just like you have a MHD stage in some gas fired power plants (exploiting the electric generation potential of moving ions) you can have a PETE heat exchanger before you use solar heat to drive a steam engine/ stirling engine. Simply because there is usefull heat left after a PETE stage.

The mention of bandgap is a bit confusing, there are no bandgap effects imho I never heard of this technology until I looked for it yesterday. It is a similarly different technology like  AMTEC, something you won’t know about but something that is equally enabling for CSP. AMTEC uses (solar) heat to drive metals through a solid material causing it to shed electrons. This closed system can convert heat to energy with an efficiency of up to 35% and like PETE leave a lot of useable het behind.. 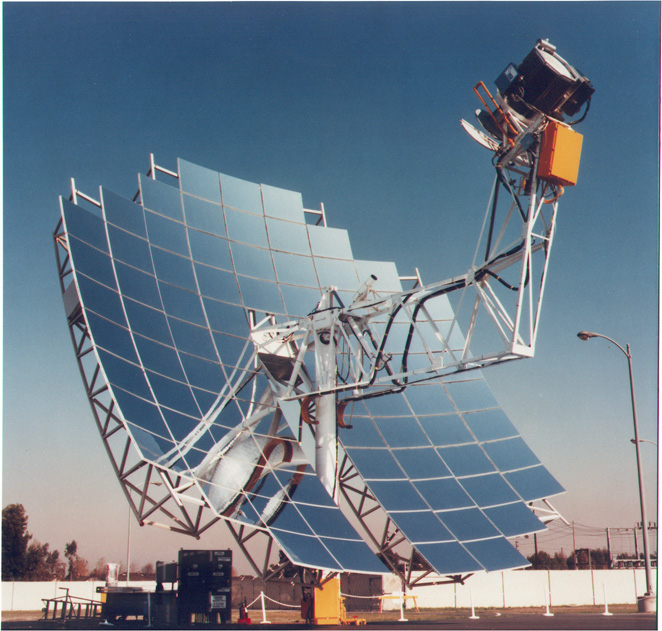 Theoretical conversion efficiency "It is concluded that no fundamental reason exists why efficiencies of 30% or more cannot be realized in converting heat to electricity by this method."

Thermionic CSP CORDIS SETIS Grand "A new-concept conversion module will be developed for electrical and thermal energy production based on thermionic and thermoelectric direct converters, thermally combined in series to increase the efficiency (thermal-to-electrical efficiency estimated to 35%). A heat recovery system will be designed to collect waste heat (standard efficiency of 65%) and provide it as an additional energy product (co-generation)."

Introduction to Thermal Atomic Batteries "In practice, the efficiency of thermionic converter can be close to 20%" (1500/2000 degrees)