Trump is dropping the ball on US global hegemony. He has openly said that the cost of policing so many countries is something he doesn’t want to bear. At the G20 he appears isolated and his actions seem inconsequential to say the least. No final statement, this global leader has signed off. Trump leaving the world to it’s own talent for cooperation

This is not a bad thing although it is risky. The US power umbrella has been based on control over fossil fuels and military projection. For a long time you could only buy oil in dollars, the so called Petrodollar, and our world was basically unipolar. Slowly as the world economy started to evolve this has been eroding, basically because anyone outside the US does not like to live under the fossil fuel (carbon) credit control of Wallstreet, enforced by Washington and the Pentagon. It was a stabilizing trinity but ultimately unsustainable and ultimately undesirable.

Law and order even in our western societies is nothing more than a self fulfilling prophesy. Because we wish it to exist, we behave by the rules and do not consider countless opportunities to break the law as real ones. We fear punishment we know won’t come in most cases, and for sure if we all decided to forget about law and order, no force could be mounted to restore it, at least not quickly. The prevalence of peace on a global scale equally depends on decent relationships being the norm, and it has been achieved mainly by the power of fossil fuels which could be distributed by the US to whoever it gave petro dollar credit. China has been a notable recipient of US fuel aid enabling it to develop as it has in the last three decades. Without the US China would not have happened.

The alternative to a global unipolar fossil credit based order is one in which the parties understand enough of the limitations of action to remain peacefull and cooperative. The balance of power is a balance of energy, but also one of opportunity to gain. What does Russia have to gain from invading Germany? It can’t really absorb it’s qualities in its own population, it makes no sense to move its population, it might as well just trade with Germany and leave things as they are.

War like all violence happens in defence or to gain something, but the cost of war will become to high to be compensated by the gains, as long as we abandon fossil fuels 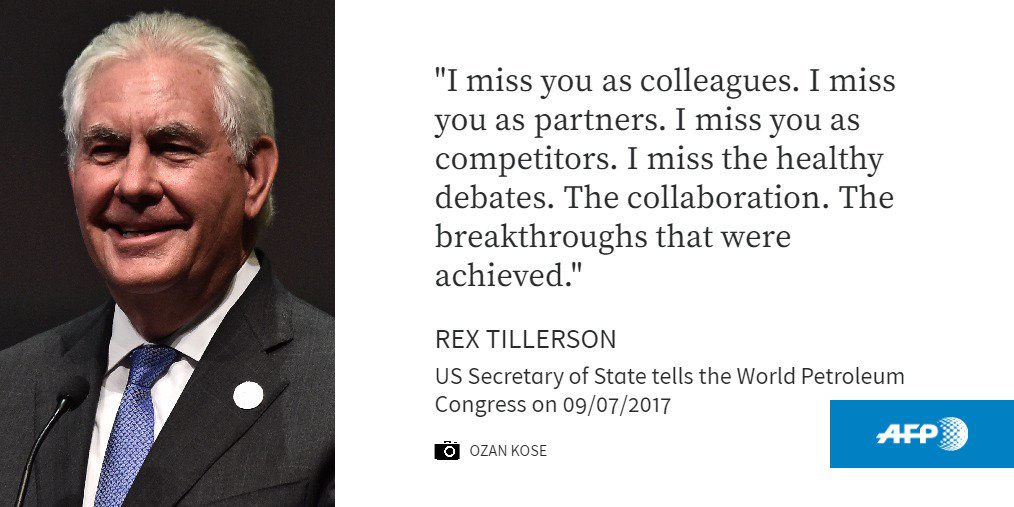 Tillerson announcing fossil fuels are over

As the USA abandoned its role at the G20 the G19 showed they where willing to continue the order, and this order they agreed would be based on mutual renewable energy based growth and cooperation. This makes absolute sense, because what has to replace the petrodollar fossil credit? Local renewable energy credit. Not only is this wise and the only survival option for humanity, but it will drive peace and prosperity for all regions, as renewables are perfectly able to sustain a modern technologically advanced civilisation.

The new world order (and humanities survival) will be conditional on denuclearization, relative race-self containement and renewable energy cooperation

You can’t really fight good wars without fossil fuels. Most war equipment is fossil fuel powered, planes, trucks, tanks, even drones. Of course warfare has evolved and we have written before you only need untouchable drones and satelites to dominate the world. This art has been perfected by the US and other countries. But light war, non nuclear war, can only serve to maintain order against small insurrections. This is ok, as long as populations are capable of cooperating productively without more than small insurrectons. It at the same time seems unlikely the world will fall into such a state of chaos that the necessary surveilance to police a cooperating productive population becomes impossible. This makes the world fundamentally stabile.

The G20 produced a denuclearization treaty. So this seems to spell a future in which our world will be multipolar, no big wars are to be fought, especially not with nuclear warheads, which just like with US and Russian warheads after Reagan and Gorbachov had their agreement, can now be used to generate electricity, CO2 free. The only thing that can go wrong could be North Korea lopping a bomb on the US, which will bomb back, and China getting involved. Another thing that can go wrong is that some nations don’t keep their population where they are, so migration and expasion of f.i. chinese or arabic populations (and possible religious dictatorships). That will cause conflicts we don’t need.

In all Trump has done a good job in landing the US believably in this new multipolar world. The 75 years ahead (until it is expected that in 2100 3 out of 4 world citizen will have died from heatwaves) offer a canvas to paint either a lasting world peace capable of defeating the biggest threat to mankind, or one in which harm infliced as temperatures rise to unbearable levels causes technological regression and chaos making extinction of our species inevitable.

a renewables based economy has much less pressure to consume resources, because banks play a much weaker role

A key element in the stabilization of a multipolar world will be communication, and a key factor in that will be internet. There are now three initiatives underway for global broadband coverage, two satelite based and one based on solar drones. It will be key to fighting climate change as it will reduce isolation of remote populations and enable robotics that can restore ecology (for roboeconomic and extraeconomic purposes). It will also help detecting (future) carbon emission crimes and natural methane sources. It will be relatively untouchable, cheap and become cheaper.

The multipolar world will be able to utilize robotics and renewables to counter the rising heat accumulation in our atmosphere, and if resources are directed away from a global arms race towards a global eco restauration effort our chances are good..