Three more years to turn the dangerous heat accumulation we are now experiencing around, at least in theory. That combined with the incapacitation of most citizen in our world economy (they either struggle to make ends meet or don’t have any power) doesn’t bode well. Of course some of the rich people don’t really care, they are going to be dead when the worst comes to pass. 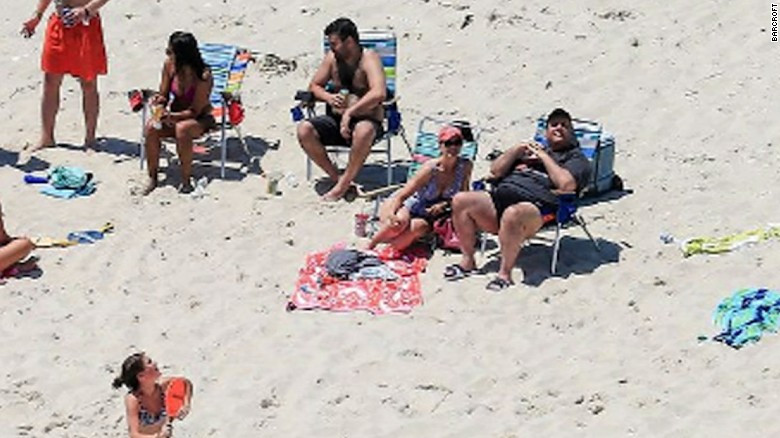 Chris Christie shuts down public beaches, then goes to the beach, then lets his minions lie about it..

Just like Mitsubishi started catching and deep freezing tuna when it became clear the species might go extinct, some if not all conservatives (who are pro fossil by definition) may be banking on the climate catastrophy, really. If they have to change course they can’t get the most numb of their voters with them. The “What happens after I die I don’t give a shit about” mentality may be pervasive. This combined with general ignorance, which is more prevalent if you life has been a breeze of luxury, because you have to be either a nerd or very inquisitive to find out and care about physical facts.

So we may be looking at a large, armed, greedy contingent of fatalists that now dominate US politics, law enforcement and military. The army has show serious interest in dealing with climate change, stating it is the single biggest threat. But congress has passed a law that prohibits the military from spending money on anything climate related. Generals that talk about climate action have been pushed aside. The party of the fatalists doesn’t seem to care. It wants to have the party.

“Bluefin tuna frozen at -60C now could be sold in several years’ time for astronomical sums if Atlantic bluefin becomes commercially extinct as forecast, a result of the near free-for-all enjoyed by the tuna fleet.”

The EPA removing restrictions that protect public health, the dismantling of Obama care, which can cost real lives, the agitation in the geostrategic sphere. All show that there is very little worry about instability caused. The thought may be that whatever happens, the poor will suffer most, the rich will escape and in the chaos nobody will care or know who did what. The screeny zombies with an attention span of no more than 140 characters sure as hell don’t know how to do anything about anything without paying for it.

Action is needed to weed people with this mentality out of our leadership. The problem is that money is too imporant, money is the promise, the virtual vision, and money today derives its value from fossil fuels. Banks ensure we all need it, we all struggle for it, which nicely organizes society, and we all get some cash when there is enough fossil fuels to go around. The new leadership has to grow from organizations that can sustain themselves 100% without money. Of course they have a big problem in gaining support, because most support in politics and business is gained from being able to give some kind of advantage, usually monetary.

The opposite may also be tried, as it seems some conservative leaders are fatalistic and thus a public risk, strong action can be taken against them. Do you arrest a person that lies about being a surgeon that tries to operate? Do you arrest a politician that claims to know better than 95% of relevant scholars and researchers? Can you sanely claim to have such beliefs? You can’t but the behaviour can be explained by the desire to just have that party without looking ahead, at the cost of countless people, possibly humanity.

As an afterthought, these people, who also want to bomb iran and be at war with China and Russia, may believe that a nuclear war will cool the planet down and give our planet time to recover. There are better ways to do that however, but how is probably to complex a question for those now driving us towards destruction.