“Auroracoin is a cryptocurrency for Iceland. It is based on litecoin and is 50% premined. The premined coins will be distributed to the entire population of Iceland, commencing on midnight 25th of March 2014.”

Money is no longer a means to symbolize effort of humans. It used to be. If you went back a few hundred years you would see people working for money, doing physical or skilled work, producing arts, crafts, farming, baking etc. Most of that work came from the sweat and excertion, which shows up in nutrition data, because the cost and value of a worker was the cost of the calories he used/produced in a day.

These days the money we pay to people is no longer related to the calories they need to survive, but to the calories necessary to keep their livestyles going. The money is used by the earner to buy goods and services, which mostly depend on fossil fuels being available. Driving a car, heating a home, getting processed food, buying electronics made by robots and underpayed slaves, surfing the internet (facilitated by tons of electronics). People are NOT productive, they are all consumers, even the food is produced by consuming 10 times the calories gained in fossil fuels. 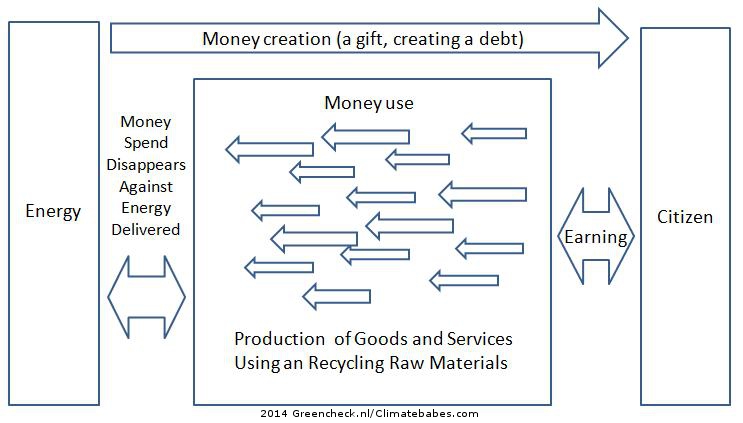 The basic flow of money as a means to distribute energy, which can be debt, a fixed coin or money that is destroyed when recieved back by the energy supplier. They should be issued by the tax office, so that most taxes can be deducted right away.

So these days money is a way to allocate energy, fossil energy to where we want it to be used. This is a big mystery, because nobody MAKES fossil fuels. We make all kinds of stuff with fossil fuels, but nobody starts the day without a barrel of oil, and ends the day with one (out of thin air). You can drill for it sure, but that is not ‘making’. Still we can all buy it with our money. The bottom line is we are enjoying an energy glut of historic proportions, and we get all that energy if we participate in the ‘economy’ which means we help spend it wisely. To maximize this spending (some people make a lot of money from it), we invade every nook and cranny of our own productiveness with automated production. Economics is the maximization of the utilisation of fossil fuels, and money is its blood.

Humans are not part of this equation, other than lucky endpoints in the production chain. We are supposed to destroy the products so new ones can be manufactured and sold. We are consumers, it’s a job in the economy. The more we consume the more people can earn a living, even if the same system tries to shorten the path between fossil fuels and production through automation.

Now what does an Auroracoin do in such a system? Without any changes it will do NOTHING. It will become a kroner equivalent at best, cause some inflation and be banned eventually. The reason being that the energy suppliers don’t want or accept such money, as it is not their own money, the money they circulate to distribute their energy. In Europe it is the Euro, if you want a guy in Germany to make a camera you need to give him Euros because he can’t buy the stuff he need with kroner, especially not the fuel and electricity, he can’t pay his rent etc. etc.

So what can Iceland do to kickstart their own island economy? They need to focus on energy and productivity. Do they have energy sources? Do they have productive industry? The answer to both is yes. Iceland has geothermal energy, and massive amounts of it. The question is do they own those energy sources (used amongst other for alumnium smelting and greenhouse heating) or are they in debted and paying off Euro debt with it. To back a cryptocurrency there needs to be energy available the price of which can be set by the people emitting the coins.

The starting point for energy needs to be a commonly owned source, so anyone using it has to pay for the energy. At the same time the money to pay needs to be given (for free) to the people involved in deciding how the energy is to be used. This is our current credit economy, but in that economy debt is widely abused to protect fossil interest.

Even if there is lots of energy, one needs to be using it to produce what is needed, mainly food. Does the energy powere the fishing trawlers, or do these need diesel bought in Euros? That means the fish needs to be bought in Euros. Are there farms run entirely on geothermal energy? There could be for sure. Those farms could deliver food to people paying in a currency with which it could buy the geothermal energy.

It is clear that handing Auroracoins to every Icelander won’t do the trick of independence, because to be independent the creator of money needs to also ‘own’ your energy sources and they need to be icelandic. In its current form the Auroracoin will fail. But if the model proposed above is adopted Iceland is one of the few countries where a home brew coin can work for sure. The same model can be applied in Spain, Italy, Greece and Portugal, but with solar electricity, wind ammonia and other renewable energy souces.