Iceland is in a unique position since the 2008 crash. It was severely hit by the end of the so called ‘carry trade’ where credit from low interest rate countries was parked in Iceland at unjustifiably high interest rates. This led to a total collapse of the countries banking system, but instead of bailing them out, the countries government opted to jail them in, take control of it’s currency and prosecute those that took unwarranted financial risks. Some governments in Europe had to wait for several billions they expected as return from Iceland, while compensating savers to prevent outrage. This was simply fallout of a scam that went on to long. The painfull injustice has been that Icelands citizens had to somehow decide what to do with those repayments. Rediculous. 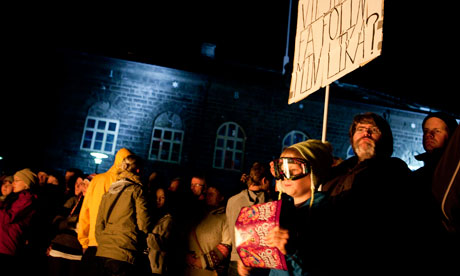 But now a new dawn of bankerless financial freedom has arrived. Cryptocurrencies, with all their flaws (mainly where it comes to their energy intensity) demonstrate how money can be something without, out of control of any central authority. A shared ledger of account in a peer to peer network, wrapped in layers of encryption can be as reliable as one ledger in a well fortified bank office. Actually the shared records are much more robust to tampering than a book or database in some computer you never get to see. Besides, those type of databases can burn down, like the one in Argentinia just did.

Iron Mountain bank archives going up in flames. Now who owns what?

But having a currency is not what makes an economy tick, at least not if it is a pure manual labour driven agricultural economy. Why? Because to run an industrialized economy you need to have the stuff needed by the machines to operate, and humans don’t make it : electricity, heat, liquid fuels? If nobody can be a gasoline crafsman it needs to be imported from somewhere, and there goes the autonomy of your economy. This is exactly the reason Iceland was in trouble in 2008. It needed Euros to power itself.

Luckily Iceland has all it needs to start fresh outside the matrix of international energy politics (without having to join queue of those that want access to energy resources). Iceland is energy independent. This may not even have played a role in the minds of the creators of the Auroracoin. It is relatively easy to start a cryptocurrency. It is hard to make it work in an economy, especially when the aim is not speculation, but true use in daily life.

We have (in order to fight the economic trouble and depart from the fossil based economy) suggested to introduce three currencies, the Euro, the Auro and the Joule. Most people don’t understand what makes a currency tick at all, they can’t see that currency, a money, is nothing in itself. As stack of dollars is nothing at all, just a stack of pieces of printed paper. Today many people think that these pieces of paper can solve all problems, but that is like thinking Monopoly money can change the game of Monopoly, or chips in a casino can bend the rules of Roulette. What can you do with your chips if there is a power outage in the casino? Right.

Money, the Euro in Europe, gets us something nobody can make, namely energy. A consumer making energy would be a farmer that grows food organically (without energy intensive fertilizer), or someone with solar panels or a wind turbine. Those would have to be fully owned by the producer, so that the energy could be used for free or sold at the discretion of the producer. For 99,99% of Europeans that is not the case. Most Europeans need energy and because they need energy they need to make money, or get money from the government.

So in Iceland, you would not be done by just having a new peer to peer cryptocurrency, handed out to everyone. In fact it would change nothing unless the energy companies recognized it (and then it gets more complicated). Of course international trade would also have to recognize it, which means they would have to know what they could buy if they accept an Auroracoin. Imagine someone coming to you with some old asian currency, trying to buy your Euros. You would say “What can I do with your asian coins?”. If I say “You can buy bags of rice with it in Asia” you’d say “I don’t need those!” and the deal would be off. Way to complicated. To introduce a currency for true economic gain it needs to be thoroughly thought through.

Basic questions of any currency are:

For the Auroracoin the answer seems to be :

These answers are naieve and weak. Suppose there are billions upon billions of coins in the pipeline (f.i. there are 127,010,319,285  Fedoracoins ) what then is the value of one?

If everyone owns a few to start off, then what happens with people that have nothing to offer?

So this is all very naive. It works only in a rural labour intensive environment where everyone can contribute to the wealth that is exchanged using the currency. With a few tweaks though, it can work, and it can work everywhere. It can be the start of the Joule we proposed.

Next post will be about how to make a cryptocurrency based renewable energy economy work.