We need climate action. The action needs to be large scale, we wrote about it in the Millenium Projects post. Short term action is the best. There are many ideas and we would like to review those, but we can also present some here that we are sure have not been presented elsewhere (will google to make sure ;-))..

Because of the loss of ice on our poles the dark seawater there now absorbs the sunlight. Seawater has a very low albedo, meaning most of the light that enters it dumps its energy, warming up the water. So instead of a 70%-80% Albedo of ice which makes it cool the region now warms up, and the warm water circulates around the oceans warmer than before. This causes more warm weather elsewhere as well as a slowing down of this process. It can in due course also warm the ice on the seafloor (the clathrate ice Shell attempeted to mine but failed). This speeds up methane release. It can also just slow down the so called conveyor belt that oxygenizes the deep ocean. 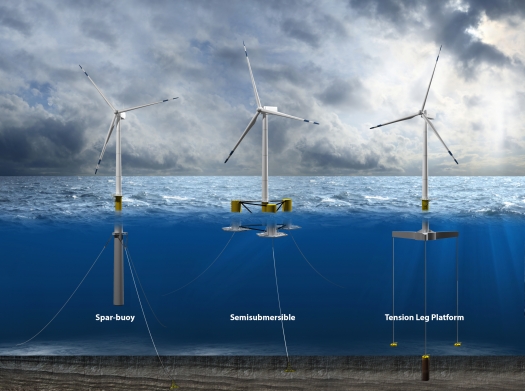 Floating wind turbines instead of a generator the nacel contains a hydraulic pump that pump seawater to the wingtips where it mixes with the cold air to form brine, snow and ice..

The solution so to cool the poles back down, and bring back ice. We think one of the options is to make more ice by sparying ocean water into the arctic winds. The wind is cold, but only where it touches the water or when it snows does it transfer that cold to the ocean or the ice. A simple cheap means of doing that would be to install floating hydraulic wind turbines that simply pump ocean water to their blade tips. This is not a new idea, its actually quite old and we wrote about it more than 10 years ago, but then it was meant to bring water into the atmosphere to be transported into the desert [link to follow].

A prototype is easy to build, further more you can calculate the cooling effect on ocean water sprayed into the wind above the ocean, and calculate how much of it would turn into snow and cover the water with ice. Even a thin layer is enough to ward off the sun. A demo could be readied this winter at the cost of about 20.000 ex towing to a location. Of course Russia is already towing a nuclear power plant to the Arctic as if they could run it safely. Because of percieved economic benefits of using the Northern Passage it may actually be the case that Russia does not want to see ice return, or only in specific places.

Such turbines can also be used to release energy from warming oceans in order to reduce the risks of typhoons and hurricanes. They can also be used to moisturize the air as it blows into the desert, the salt falls out of the air over a couple of miles so you end up with fresh water clouds, moist air or even rain..

Another idea, quite a lot more megalomanic but ultimately feasible, would be to shade the poles. The polar regions constitute only a small portion of the total surface aread receiving sunlight. The exact square milage we haven’t calculated but its less than the 12000 km at the equator, about 2000 or 3000 km. A solar shade in space may be able to cover this region and shade it all year round. SpaceX starships could be used to put the necessary systems in orbit around the Sun at one of the Lagrange points (L1) so the shade remains in place. This may help prevent disastrous plans like dumping SO2 into the atmosphere, which would not only reduce biological carbon capture but also be enormously polluting.

SpaceX and Elon Musk are really pushing the manufacturing envelope at the moment. This is one of the realities we need to face  : We need to actually get stuff done. We can build desalination plants on the edge of the desert and pump cool water inland and irrigate massive plantations but no matter what the idea is the most important question remains : What do we do right now to get there as fast as possible. And then we are talking pure climate action projects, nothing economica! The only way for intitiatives to gather speed now is as a government project, as a private investment or one with economic benefits. The impact of any project may be very low so this also discourages people from undertaking them. The best projects seem to be those that secure life for at least those involved. The fact that human interests is almost always a necessary factor in human activity suggests we should leave some of these projects to automatic systems (see this piece).

Algae have been studied because of their ability to evolve O2 from CO2 and sunlight at an incredible rate. Pond based systems have been proposed and build but turned out to be too unwieldy, unless they could be fertilized with actual ocean water as happend in several fish farms around the world (in Hawaii and Spain for instance).

Deep ocean water is cool and full of nutrients, it is used to fertilize several fish farms around the globe

As we described earlier a study was made on the effect of a network of (deep) ocean fertilized spots to capture carbon from the atmosphere and turn it into biomass. The effect was expected to be positive for two reasons : CO2 capture and cooling of the atmosphere. The idea was discouraged because “If you would stop you would have warmed the ocean” [link to follow]. The question is why would you stop? The big problem is that the atmosphere is so high and the biosphere, interaction zone of the ocean is so tiny. You would not capture much CO2. But it would generate oxygen and sequester CO2 and increase fish biomass.

To do the above one would need to build floating wave activated pumps for ocean water that would take nutrient rich water from 200 meters and pump it to the photosphere, where ocean organisms could use it to photosynthesize CO2 into oils and even carbon pellets.

The bove image comes from a study that is really not pushing this idea, and sees a lot of obstacles to its succes. It says “Only a small fraction of the carbon captured in the plankton blooms makes it to the bottom of the ocean” BUT the rest is stored in living organisms that would otherwise not be there! So what is wrong wit storing CO2 in living biomass (the only thing maybe is that oxygen is also stored). Modelling of this idea should be done but another way to look at it is : If a zone of the ocean is dead then any life you evoke there will be a plus and store CO2 (lets not forget hydrogen from burning hydrocarbons).

Of course again wind turbines could be used to increase the CO2 content of parts of the ocean although floating crash barriers might do the same. The question becomes : How to start building these pumps and bringing them to locations where they can do good. What to make them of, how to maintain them, how to monitor their effect.

“Around 70 percent of this seaweed, and therefore carbon, will sink to ocean depths below 1,000 meters, meaning that this captured carbon is unlikely to return to the atmosphere. “

Fertilization ideas have never been thoroughly tested. Some test sites have been disturbed. One could solve iron deficiency  by launching floating iron buoys where iron could help, they could be tracked by satelite or connectivity to satelite internet (SpaceX and Amazon are working on that). They could be realtively small as to not cause damage. Strangely floating buoys are used by fisherment ot create concentrations of fish (as fish like to stick together and hide from birds and underwater predators under these). These buoys are being removed but we think they are a good thing. Sadly the fishing industry acts like its in a war for survival. It is quite easy to imagine a factory making such fertilization buoys!