We wrote about the risk of tectonic activity due to climate change (in dutch) in 2011. The idea was to imagine what the weight of the ice removed from the South pole means for the shape of the crust. We knew that rather than a billiart ball the earth is more like a water filled balloon. The crust is only 50 km thick and underneath is still 6000 km of molten lava. A real good visualization of earth is shown below, where a ball of water is manipulated in zero gravity.

Imagine it with a thin layer of something that can crack on the outside. Then you can see how tiny forces (relative to the mass of the water) can still change its shape. The forces the changes caused by climate change are causing are big enough to notice it. Greenland for instance is expected to rebound as much as a kilometer.

“And the greater weight of the water in the oceans where sea level has risen as ice melts can ‘bend’ the Earth’s crust.”

We calculated the ice removed if the poles melt would be the size of a cube of 4 x 4 x 4 km with a weight of 10.000.000.000.000.000 kg. That will trigger a reshaping of the crust for sure, causing Earthquakes and vulcanic activity as the weak points in the crust where lava wants to get out are broken by the movements. 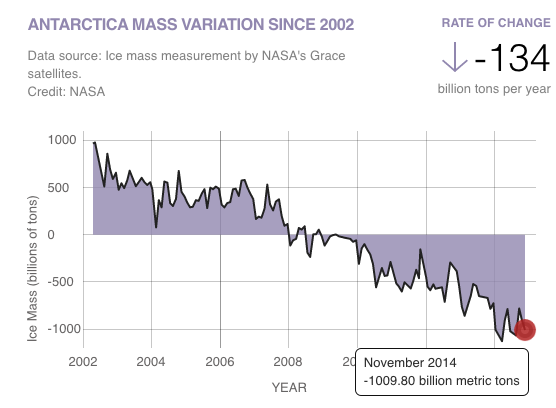 In 2013 we posted about this vulcanic effect. Which was already mentioned in 2009 by the Guardian. Even earlier in 2007 there was a piece about this in on livescience.It was interesting to see that Scientific American had an article about in 2013 that made the eventuality ‘possible’ using the word ‘may’ which so often means we don’t pay attention.  It was actually super weak.

The study (in scientific american) doesn’t address whether modern-day climate change would have any impact on the frequency of volcanic eruptions, though in theory it’s possible, Jegen said. (bron)

A case of ‘cast doubt to paralyze’ in a field far from most people’s attention. Although more recently earthquakes have been found to be caused by shale gas drilling, and this link is the cause of changes in dutch conventional gas extraction.

“Although they’ve described it in the past, nobody’s thought about it in terms of future effects of climate change,” said Bill McGuire of the University College London’s Hazard Research Center. in 2007.

Newsweek puts all doubt to rest with an article about the current Earthquakes that devestated Nepal and killed Everest climbers. Let the idea of Mount Everest shaking sink in for moment. The warnings of 2007 are now brought out in clear language :

“Climate change may play a critical role in triggering certain faults in certain places where they could kill a hell of a lot of people,”

Dr Pierre Bettinelli was the scientist who in 2007 first showed how this vast flush of rainwater, second only to that of the Amazon basin, affects earthquakes in the Himalayas. Nice.

All these vulcanos and earthquakes happen because we use fossil fuels, which causes climate change

“There’s a volcano in Alaska, Pavlov, that only erupts during the autumn and winter. The 10cm or 15cm rise in sea level during the winter months, when low pressure comes over, is enough to bend the crust and squeeze magma out. That’s an example of how tiny a change you need,”

This doesn’t bode well for may sensitive vaults like the Andreas Faultline and the Yellowstone Caldera. Even if they where going to crack and blow at some point because of build up pressure, now we have another factor disturbing the peace in our earths crust : Fossil fuel use.

The production and sale of oil, coal and gas is a crime against humanity

So there is yet again a way in which fossulfuel, burned because it is extracted by oil/gas/coal companies and distributed by the economic system, can kill a sizable portion of humanity. Or, if we keep letting shell, BP, Rosneft etc. do whatever it wants, do we have to say “Will kill a sizable portion of humanity” if not all of it, as our climate runs away as it did before the so called Great Dying.